1885: The company was established based on the intuition of Giorgio Rolfo who, in 1885, opened the first Cartwright's shop in Bra, near Cuneo, for building carts and carriages. At that time, Italy was getting ready to recover from the 1880 economic crisis. Policies promoting trade protectionism were conducive to the development of the iron and steel, chemical and mechanical industry, therefore the movement of goods and people became a fundamental factor for guaranteeing economic progress.

1930s: On the death of the founder, his son Antonio took over the company, although his was not an especially easy task considering the context in which this transition took place. Indeed, the Second World War made it even more complicated to carry through and meet the challenges connected with the production changes imposed by the motorization of the cart sector. Parallel to these changes, the motorway network began to develop in Italy, and the Second World War gradually drew to an end.
1940s: In the late 1940s, the shop became a workshop for motor vehicles, working full time on truck repairs on behalf of cooperatives and local customers. Over this period, the Rolfo workshop produced its first transporting equipment, quickly establishing a wide range of vehicles for road transport of the most diverse types of goods. The Rolfo family also specialized in building customized and made-to-measure dropside and curtainside vehicles in order to meet customers’ needs. Following the success met by the vehicles produced and the signing of some important contracts (particularly Ferrero and Cinzano), the company began to extend its new industrial complex, initially comprising an indoor surface area of 5,000 m2, for an area of 15,000 m2 in total. The mechanical department was moved to these facilities with most of the workforce, by now comprising about 100 workers.
1960s: It is important to remember Rolfo’s participation in the Turin Motor Show in 1961, which gave the company its first opportunity for international visibility, soon followed by successes on the world markets. During the same decade, the company started producing car transporters, which over time became its core business.
1970s: The 1970s were marked by a swing in European markets such as Germany, Austria and France, where giant competitors in the industry were able to implement economies of scale against which an operator like Rolfo couldn’t compete. However, the company rose to the challenge, combining functionality and versatility in its vehicles.
1980s: During the 1980s, the Rolfo brand made its first appearance on the African and Middle Eastern markets, while at the same time, in Italy the crisis of the mechanical industry was spreading; this was also felt in the Bra area, and the company was forced to lay off staff for the first time ever.
1990s: Despite this, Rolfo never stopped evolving, and in the 1990s, the company penetrated new European markets such as Spain and the UK, and established its plants in France and Argentina.
2000s: In this global context, the manufacturing system had changed radically, and yet the company has never lost sight of the specific features that marked its history and made it successful. In 2007, the production plant in Italy registered the record delivery of over 1,000 units for Russia and the Ex-Soviet countries alone.
In the same year, traditional manufacturing changed over to lean manufacturing, a production philosophy based on eliminating waste, simplifying processes and adapting production to market demand.
2010s: Later, the global economic crisis and the ongoing recession into which Europe fell, at the end of the first decade of the 21st century, brought the company face to face with the Indian market and, in general, with new business opportunities in developing markets. To this end, Rolfo launched a deep restructuring process of its industrial fabric, involving internationalization and the diversification of its product range.
TODAY: After more than 130 years, our story continues... 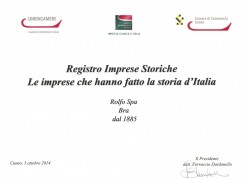 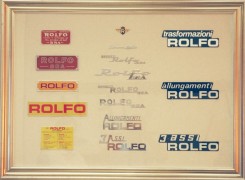 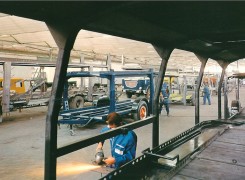 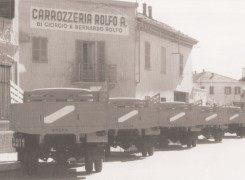